Wall paintings in the nave

During the restoration of the nave (1941-1944), the whitewash was chipped away from the walls. Unfortunately the discovery of beautiful wall paintings under the whitewash came far too late resulting in the present, partly incomplete and damaged wall paintings. 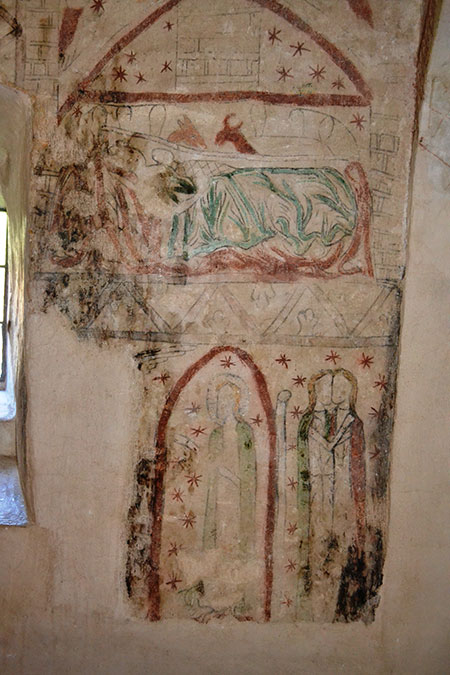 Around the triumphal arch and on the North wall, parts of the 13th and 14th century wall paintings can be seen. In addition to the hagioscope in the North wall, the story of Jesus’s birth is depicted. Mary lies in a stable under a green blanket. In her arms she holds the Christ Child while the ox and the donkey look on. Underneath is a triptych, the Annunciation (lost, although part of the angel’s wing can be seen). Then, either Joseph or Jesus and, to the right, the meeting of Mary and Elizabeth.

Above the triumphal arch, a depiction of a group of saints, most likely the apostles, can still vaguely be seen. The large figure on the left side of the East wall, whose upper body is missing, could be St Christopher. This saint in particular was generally depicted as very large during the 15th and 16th centuries at which time the tradition was that those who had seen St Christopher would not die that same day.

In the adjacent niche, a painting of the flight into Egypt can be seen. Joseph walks as if he were a 'Drenthe vagrant' leading a donkey with his nap-sack on his back. Unfortunately, the image of Mary has been entirely obscured. 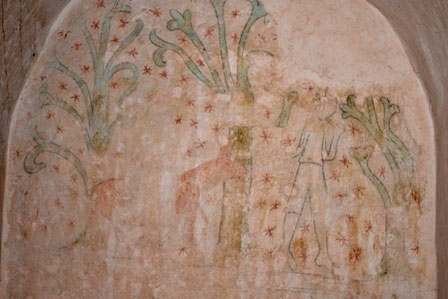 Alongside the North side-altar, adjacent to the niche, can be seen a wall painting of Mary on a throne with the Christ child. This is the church’s only depiction of an enthroned Mary to survive the Reformation.

My child, do not forget my teaching,
but let your heart keep my commandments;
for length of days and years of life
and abundant welfare they will give you. 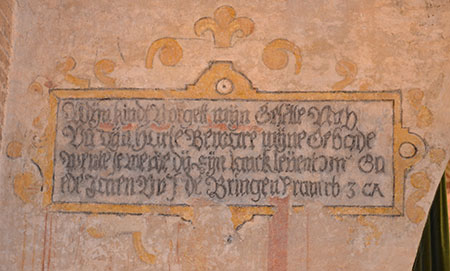 Behind this text in found another fresco. The wing of an angel is faintly visible.

The Latin text to the right translates as: "Not uproar but love is heard in the ears of God". 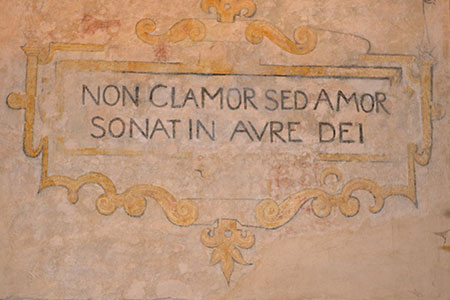